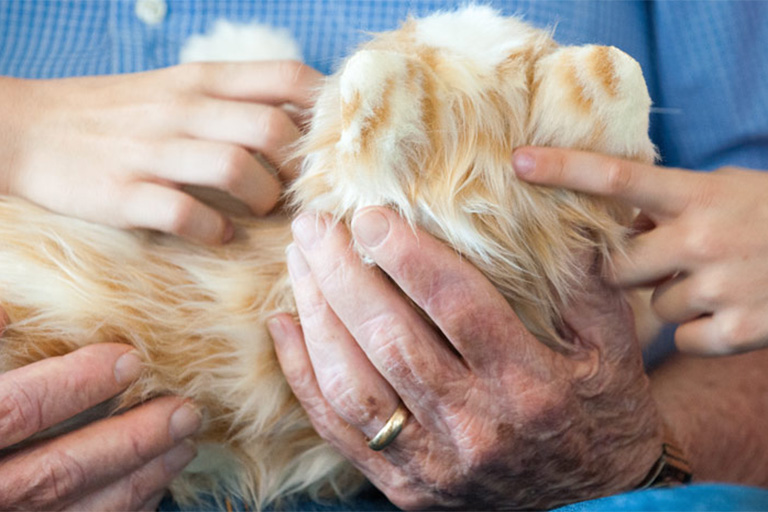 Cats are significantly transforming the demeanor and responsiveness of residents, particularly those with dementia, at Quincy Village, a southern Pennsylvania continuing care retirement community.

But these cats don’t require litter pans, although they do purr contentedly when their soft fur is petted or brushed and meow pleasantly with attention.

Robotic Companion Cats have been adopted by a dozen or so residents of Quincy Village, one of two Presbyterian Senior Living communities recently recognized as Certified Centers for Successful Aging by Masterpiece Living, which partners with organizations to maximize the potential of older adults.

It has been a little more than a year since Hasbro introduced its first product designed specifically for elder care—JOY FOR ALL Companion Pets—first as cats and recently, dogs.

While research is inconclusive on the use of robotic pets as therapy, the Companion Cats have gotten rave reviews in stories stretching from The New York Times to technology writers of the BBC. But the best reviews are provided by those using them and the staffs and families who can see the difference. 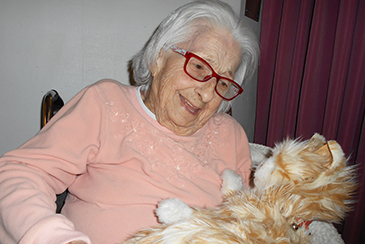 Pauline Kinley is a Quincy Village resident with severe dementia and memory impairment. The dementia has severely affected her ability to communicate and prior to the introduction of her Companion Cat, her communication was nonsensical.

“She was one of the first to use a Companion Cat and had some issues that keep her active, wanting to get up and walk around,” said Heather Coy, Quincy Village assistant administrator. “She had more care needs, often requiring someone to be with her. We had initiated this to help console her and found it to be very effective.”

Staff says Kinley has become a “new person” who has re-engaged and become responsive in communication, holding regular, coherent conversations with staff and visiting family members.

“Her family said they’ve had some of the best interactions with her that they’ve had in several years,” said Coy. “We’ve found it works very well for her. It also gives her a good opportunity to provide care for something else. She’s a mother and spent most of her life mothering. Now she’s being cared for, so the roles are reversed. It’s a good opportunity for her to still be able to nurture something.”

The Quincy Village Auxiliary helped fund the Companion Cat project with a few cats last October. The feline collection has grown to nine, plus four dogs, new to the Hasbro collection.

The Companion Cats look, feel and sound like real cats and cost $99.99 each. They have built-in sensors that respond to motion and touch, often meowing when staff walks into a resident’s room.

Realistic, soft fur looks and feels like a real cat, and they make cat-like movements—nuzzling, moving their paws, rolling over when petted and purring. What Hasbro calls VibraPurr technology sounds and feels like real purring, which has a calming effect when residents hold the cats in their laps.

Staff has developed processes for tagging the pets, registering them with residents and cleaning them per manufacturer’s recommendations with proper products. A team approach is used to determine which residents would benefit and provide individualized care.

It’s easy to see who’s benefiting, because the difference is so remarkable. For one resident, the cat works well at night. Another resident was very fretful, wanting to get up and clear the table in the dining room. She is more content now to sit and care for her cat. She’s not getting up as much and not falling.

“We’ve had several other residents falling, and the cats seem to be a contentment type of thing, a comfort. They’re not searching for anything,” said Bobbi Bibbs, certified licensed practical nurse. “A lot of behaviors with people who have dementia are because they’re uncomfortable in some way. One of their basic needs is not being met. With these companion pets, they’re not getting up and searching for what they’re needing at that point in time.”

Coy is quick to point out that the program has multiple uses beyond those with dementia and has been used to help with grief, adjustment and loss, even just as residents adjust to their new environment after a move or the loss of a pet. 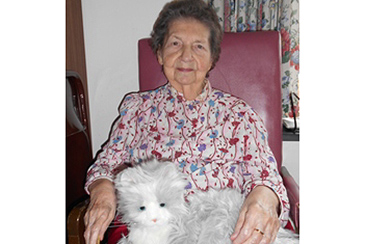 Betty Seilhamer, a long-time resident of Quincy Village, was recently widowed. The morning her husband passed away, the nursing staff brought one of the cats to her room. The cat’s presence helped to bring peace to her through the grieving process, and now she invites others to her room to visit with the cat. In this way, the Companion Cat continues to help her cope with loneliness and is used as a way of facilitating social interaction.

Before the cats are used, staff discusses the Companion Cat program with the residents and their families, so it’s agreeable prior to use. Families have appreciated the program, with no criticisms or dignity issues reported.

“Families know these aren’t just stuffed animals,” said Coy. “We all see the progress and benefits in so many ways.”